“He knows my sins and cleanses them. He is verily my God!” 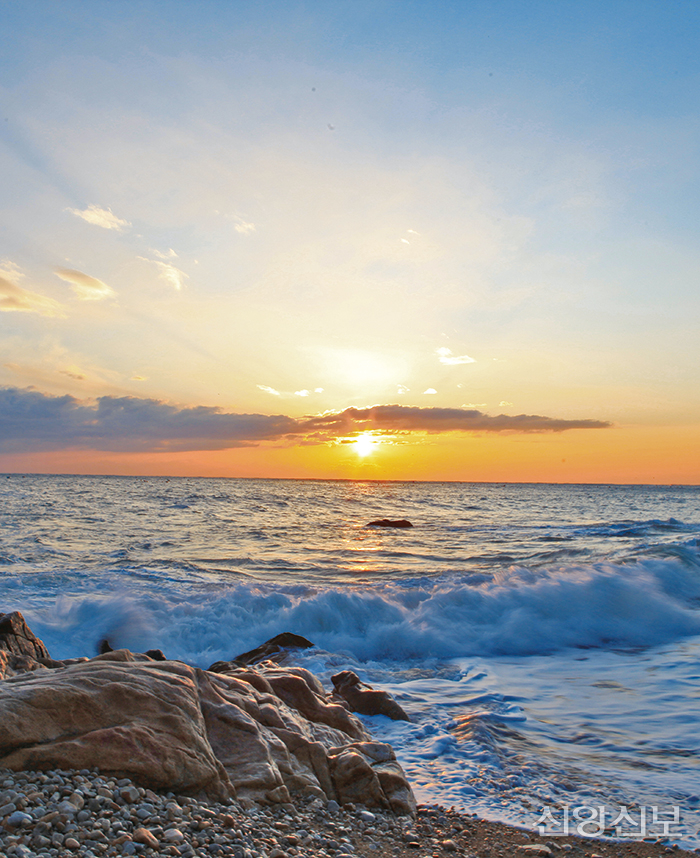 Sun-rise Over the Sea of Shinangchon

Since 1955, when God began the history of salvation, many have personally experienced the power of His blessings descending like dew. The following testimonials of faith have been compiled to record their experiences at the moment they realize that the one sending down blessings like dew is none other than the one mentioned in the Bible as the Olive Tree who comes to the earth in the shape of a human being.

Announcement of His Godhead by Unleashing Tsunamis

On the night of December 24, 1980, when I was Managing Director in the Executive Department of Kijang Shinangchon, the security at the steel mill called to report, “Fierce waves from the sea are battering the Steel Mill Coast.” Upon arrival at the location I found the rolling mill washed up to the road, its posts pulled up all the way and hanging precariously in the air. To prevent the plant site from washing away bulldozers were used to push huge boulders along the shoreline but they got picked up and carried away like pebbles by the gigantic waves. What was most surprising was the absence of even a breath of wind in spite of the high waves.

I gave a detailed report to God: “There is no wind blowing but tsunamis are rolling in, the plant site about to wash away.” Showing no sign of alarm He said, “Really? Go back and see.” When I returned to the Steel Mill Coast, this time a fierce wind so powerful as to knock one off one’s feet was blowing from the land seaward, where the tsunamis had reared up, poised to pounce on the whole steel mill site and snatch it away. Hearing my hasty report, He said, “Don’t worry. You’ll know in a while.” Lo and behold, the tsunamis froze, faltered, and fell back, the sea becoming tranquil, whereupon I reported, “It is all calm.”

After announcing His being “the Olive Tree” in January, 1981, God said that the tsunamis off the Steel Mill Coast had been staged to show his power as Creator of the universe, “to announce His Godhead.” How can one imagine tsunamis rising where there is no wind or running into a sudden headwind that crushes them? Having witnessed the tsunami spectacle with my own eyes I know God to be the Creator for sure. Moreover, realizing that “I have all along followed God who has come to this earth,” I know deep in my heart how truly blessed I am.

God Who Knows My Sins and Cleanses

When I went to Gijang Shinangchon on one of its Blessing Days to get hands laid on me, I was trembling with fear. Having heard Him call out people’s sins whenever hands were laid on them, I was afraid that my sins would be exposed to the whole world at last. But determined not to lose this opportunity to cleanse my sins, I stood in line, praying nonstop, “Please cleanse my sins.” My head was filled with that one prayer. When I came before Him, He said in a gentle voice, responsive to my entreaty, “Yes, I’ll cleanse you.”

When He announced that He was my God, I remembered this incident and thought, “He knows my mind, knows my sins and cleanses them. He is verily my God!” I wept and cried, unable to believe that I, an unworthy being, had come to know Him, and realized that God had come to this earth to save mankind out of His great love beyond words.

I wept and cried, unable to believe that
I had come to know Him, and realized that
God had come to this earth to save mankind
out of His great love beyond words.

The Amazing Power Displayed by God

This took place in the summer of 1985. At daybreak, when it was still pitch dark, I had an unexpected call from God, who said, “Look at the star in the eastern sky.” Since the sky was blocked by Building 2 next door to my place, I ran out right after the call and went to the intermediate guard post where fire engines are now stored. Upon arrival I looked to the eastern sky to find the big God star shining from among other stars. I called God and told him His star was visible. He said He could make that star three times bigger. No sooner had he spoken than the star expanded in every direction glowing.

After describing what I had seen I hung up but He called back to say that He was magnifying it even more. No sooner had He spoken than the star did grow bigger as He had declared. After doing this a few times, He said, “I can make that disappear.” Barely a second or two later, the star did disappear. Shocked, frightened, I stared at the sky more, thinking maybe a passing cloud had hidden it, but the other stars were twinkling as bright as ever. Then He called and said, “It will return.” and it did indeed. This unbelievable spectacle went on right before my very eyes.

It wasn’t just me, however. Called by Him at the same time as I, the ministers and laymen of the parishes all over the country looked up at the sky and witnessed the star swell, then shrink and disappear. This is how God demonstrated and verified His power not only to a few of His people but to everybody.

To God Who Leads Me, the Lost and Wandering

After participating in the Han River Sandy Beach Rally as a middle schooler, I attended the Seoul Central Chunbukyo Church as a member of the Special Evangelical Crew and also worked at the knitting mill in Sosa Village of Faith.

Then, returning from my military service, I couldn’t go back to my religious life for no particular reason. One day in 1984, however, I suddenly felt “This is no way to live,” and started praying. A Director at the Hankook Koro Cement I set up a chapel for prayer at work and held Sunday services there with colleagues. Then I was baffled by the passage in the Bible regarding a mob tormenting Cain for stoning his brother Abel to death. “A mob when there were only Adam and Eve, Cain and Abel around? Could there be an error in the Bible?” Plagued by the doubt I asked established church members and pastors but, to my disappointment and frustration, didn’t get back anything satisfactory.

In search of the answer I went to the Chunbukyo Church in Kwangjoo, whose minister told me about errors in the Bible, adding that in 1980 God had unmasked the true identity of Jesus. This debunking of Jesus shocked me no end. I can’t remember what we talked about afterwards but, lightheaded, I felt the room spin. A Christian who believed in Jesus as my savior until then, I got angry and regretted coming to the church. For a whole week or more I couldn’t eat and couldn’t put my mind to work at the place of my employment. My head kept spinning and I was visibly losing weight. Those around me noticed and worried.

On the 6th day, a Saturday, I suddenly had an urge to read the Chubukyo Weekly, previously handed to me by the minister. The page I opened to carried God’s message. The more I read, the more vividly could I trace out the image of Elder Park Tae-sun, correction, God, telling us with unchanging consistency as at the beginning, “Do not sin.” This made me realize that the Olive Tree I had longed for all along was right there deep in my heart. Jesus being no savior was now a non-issue. In an instant a real miracle took place. I was reconnected to the blessing of Water of Life as at the beginning. My head, chock full of mixed up junk, suddenly cleared up and emptied out, leaving a big open space.

I was crying with deep emotion, when the phone rang. It was the minister, who asked, “You’ll be at church tomorrow for service, won’t you?” I shouted, “Yes!” To this day I offer my prayer of thanks for the blessing of being led back to the right path, away from ignorant wandering.