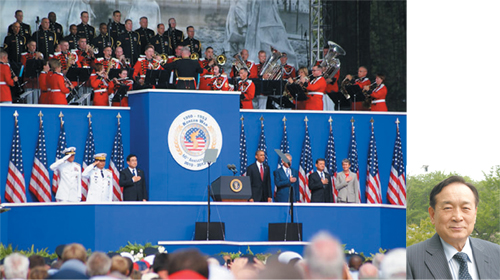 I am honored to have this opportunity to express, from the bottom of my heart, my gratitude and the gratitude of the Korean people, to the American veterans who fought in the Korean War.

As written on the Korean War Memorial in D.C., “They came to the country they had never seen before, and fought for the people they had never met before.” As a child who lived through the war, I was an eyewitness to their bravery, their determination, and the great sacrifices they made, so that South Korea survived. Your sacrifices were not in vain. Because of you, 50 million people are now living free in what has become one of the most democratic and affluent nations on earth.

It was all because of you. I remember the desperate situation we were in when the Korean War started. I was a 12-year-old living in Seoul on Sunday morning, June 25, 1950, when Communist North Korean forces attacked the Republic of Korea all across the border with modern Soviet-made tanks and artillery. South Korean soldiers, totally unprepared and without a single tank, were simply no match. They had to retreat, suffering defeat after defeat.

Just three days after their invasion, on the morning of June 28, they marched into the capital, Seoul. On that morning, I went out to the streets and watched North Korean troops armed with Soviet-made guns, marching down the street along with Soviet-made artillery, and tanks. South Korea was on the verge of being totally destroyed by the Communists.

But, thanks to the timely decision of President Truman, U.S. and U.N. forces came to our aid. It was the first ever showdown between the forces of democracy and freedom and the cold, ruthless forces of Communism, and their invasion was successfully deterred. Following the successful amphibious landing in Inchon harbor on September 15, under General Douglas McArthur, Seoul was taken back by the U.S. Marine Corps on September 28, three months after the initial Communist occupation. On that day, I saw the Marine Corps and their tanks advancing along the street, with the citizens of Seoul applauding, I was one of them, clapping with all my heart. And I would be a witness to the continuing sacrifice that you made over the next three years until the cease-fire signed on July 27, 1953.

I have no words to adequately express my thanks for your brave and selfless sacrifice. As it is written on the Korean War Memorial, “Freedom is not free.” The freedom and democracy which the Korean people now enjoy certainly did not come free. The price was very dear, and it was paid by you, those veterans who served during the Korean War. So, I thank you again from the bottom of my heart.

God bless you and God bless the United States of America.