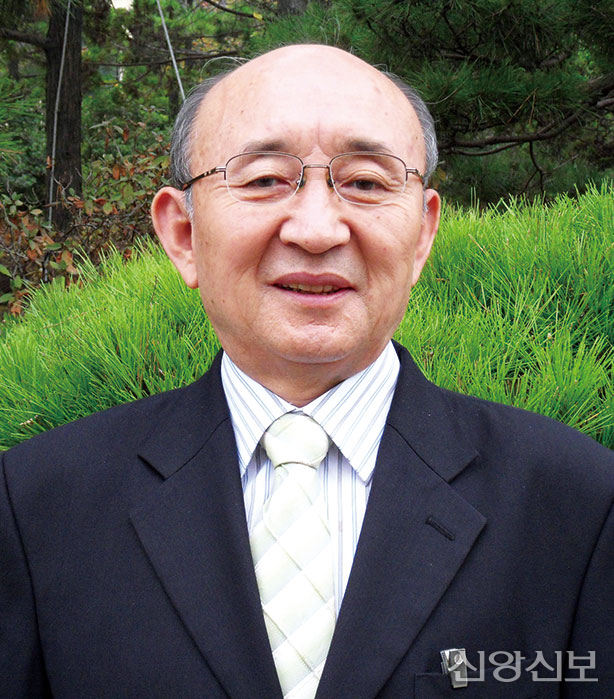 After his laying hands on me, I wondered, ‘The elder saw me for the first time, but how does he know my sins?’ But as I kept listening to the sermons about the Olive Tree, I began to think like this, ‘Isn’t the Olive Tree the one who gives grace like dew? How can the one who gives grace to wash away sins not know the sins I have committed? Only the Olive Tree can point out sins while laying hands, nobody else.’ When I realized it, I was very ashamed and felt sorry that I doubted about it.

Since then, as I had his hands laid on me, I began to think deeply about sins. If I commit a sin, it will be revealed in front of God when he lays his hands on me. So I naturally became very careful not to commit a sin. Moreover, his desperate call “not to sin” was clearly inscribed in my heart. Thus, I came to make a decision not to commit even a small sin, taking the Law of Liberty ‘Do not sin even in your mind or thought’ as my life-time motto.

As I only saw Seoul devastated by the war,
I couldn’t keep my mouth shut
when I saw the Faith Village being built so beautifully.
I began to have a hope that anything was possible

At that time, God emphasized, “If you don’t receive the Holy Spirit and become a new person, you can’t get salvation.” And he compared the Christian church to a bath tub without water and said, “How can you wash away your sins and obtain salvation without the Holy Spirit?”. He also said that pastors of Christian churches are dead blind and that those pastors who do not know anything about salvation are leading the church members to the wrong path just like a blind man leading another blind man and falling into a pit altogether. At that time, the Christian churches criticized the Water of Life, saying, “hand-washed water, foot-washed water”. But one Sunday, I had a chance to see God blessing the Water of Life. The first floor of the Twenty-Thousand Altar with a seating capacity of 20,000, He blessed a large bucket of water, saying “Shh! shh! shh!”. As a person who previously recovered from fever by drinking the Water of Life, I watched closely how the water was blessed and turned into the Water of Life. And I began to realize that the slander spoken by the Christian churches was really malicious and vain.

After comparing the Christian church
to a bath tub without water,
He asked, “How can you wash away your sins
and receive salvation there without the Holy Spirit?
Just as the blind lead the blind,
the pastors are leading their members to hell.”

Since then, I continued to work in the student council and often had opportunities to receive blessings. So I visited Sosa Faith Village several times. Sosa Faith Village under construction was taking on a beautiful city look day by day. Upon entering the entrance, I could smell the sweet smell of castella from the confectionery factory and hear the sounds of machines running vigorously from dozens of factories. In the residential area, brick houses with pretty-colored roofs were built. There was the Industrial Hall displaying the products of the Faith Village with the status chart of construction, and the ‘ownerless shop’ with no cashier was also there. Since I’d only seen Seoul devastated by the Korean War, I was really amazed at the newly built Faith Village. When our country was dependent totally on foreign assistance, it was truly remarkable that the Faith Village was built on its own without getting a single penny of assistance. God emphasized ‘We should abandon the idea of getting foreign assistance and should stand up on our own feet.” Looking at the Faith Village, I was able to feel the will and hope that ‘we can do it, too’.

In the summer of 1958, a large-scale revival meeting was held at Nogu Mountain in Sosa Faith Village. Hundreds of thousands of people came from all over the country and it was truly spectacular. As I wanted to attend the meeting, I ran to Sosa Faith Village as soon as school was over. One day during the meeting, when we held an evening service, we saw something like a white pillar of light coming down from the sky above people’s heads. I wondered, “What is that?”. After the service, I talked with the people and became to realize that it was the Holy Spirit coming down like dew. During the six-day meeting, the indescribably good scent continued to spread, which made me tremendously happy and joyful. Surely, He was giving me the grace and I thanked God.

Since then, God was unfairly imprisoned twice. As he led unprecedented large-scale revival meetings, built a Faith Village, and a large number of followers flocked in like a cloud, the pastors of Christian churches and some politicians were bound to feel fear. Because of their conspiracy and scheme, God was imprisoned without any sin. And, since the media published slanderous articles about Chunbukyo Church and Faith Village almost every day, my father also began to object strongly to my going to Chunbukyo Church. But I couldn’t help but make a firm resolution in my heart. Since I received the precious grace and realized that it was a true path, I thought that no matter what the world said, I would follow this path.

The minister lost his senses from briquette gas.
As the Water of Life was poured into
his mouth little by little,
he breathed ‘Huh~’ and opened his eyes.
He recovered soon.

In 1963, I joined the army and started my military service. I was pretty much worried about not being able to attend the church service while serving in the military. But fortunately, I could participate in a Sunday service at the nearby Dongducheon Chunbukyo Church with the permission of the battalion commander. Being able to worship once a week and hear the news of the Faith Village was a great help to my life of faith. And whenever I had a vacation from the army, I went to Deokso Faith Village to receive God’s blessing and looked around the beautiful Faith Village.

In 1965, I was discharged from the army and attended Seongdong Chunbukyo Church near my house. After Minister Park, Yong-han was appointed, something like this happened. One winter day, the Minister did not come to the church even after the daybreak service time. So I went to his parsonage with some other young church members. Although we knocked on the door, there was no sign of movement. So we opened the door and found that Minister had lost his senses from briquette gas in the room. We were startled and didn’t know what to do, but one Deacon who followed us told us to open the door and get him out quick. So we took the Minister out of the room. And when we poured the Water of Life into his mouth little by little, he breathed, “Huh,” and opened his eyes. As he said he felt cold, we brought him to the room and warmed him up. He recovered soon. As he might have passed away, all of us breathed a sigh of relief. With the Water of Life, the Minister resumed a healthy life as before.

Unleashing tsunamis, it was announced “The Olive Tree is God.”

I was impressed by the remark, “Korea is a blessed country where the sun rises”