I was impressed by the remark, “Korea is a blessed country where the sun rises” 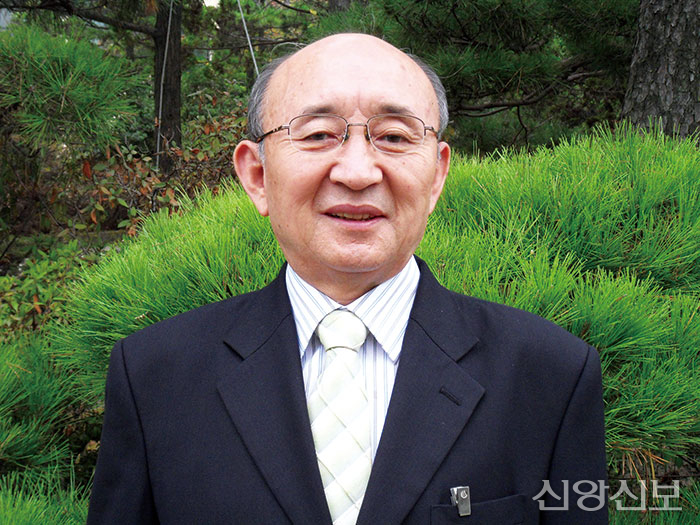 I was born in Hamheung, South Hamgyeong Province in 1942 as the eldest son of four siblings. After the liberation from Japan on August 15, 1945, my whole family fled to South Korea and lived in Seoul, but in 1950, when the Korean War broke out, we had to flee again to Busan. My mother attended the Presbyterian Church regularly since she came to South Korea, and I also attended the service with her occasionally.

After graduating from elementary school in Busan, I lived with my aunt in Seoul and attended the middle school. Ever since my aunt (the deceased Hong Hae-il, Senior Deaconess) who was a Presbyterian church member participated in Elder Park, Tae-sun’s revival meeting at Namsan in 1955, she attended Elder Park’s meeting often, and then later began to go to the Chunbukyo Church established by him regularly, and also began to propose me to go with her, but I did not go because I wasn’t very much interested. One day, my aunt gave me a sermon book entitled “The Miracles and Mysteries of Elder Park Tae-sun” and I read it. There were many stories of people, who received grace from Elder Park including such prominent figures as Congressman Yoon, Chi-young and University President Yim, Young-shin. At that time, I vaguely thought, ‘Elder Park may not be an ordinary person.’

My aunt and mother, who began to believe in God earlier than me, asked me to go to the Chunbukyo Church
in various ways, but I refused, saying I wasn’t interested.

In 1956, the following year, my family in Busan moved to Seoul. From then on, my mother attended the Chunbukyo Church after being converted by my aunt. Then, when my grandmother passed away, the minister of the Chunbukyo Church along with his church members came to have a funeral service. The minister applied “The Water of Life” blessed by Elder Park to her body. After the funeral service, when I looked at my grandmother’s body, I noticed the wrinkles of her face smoothed out and her skin taking on a pristine color. Furthermore, her body, which was stiff after she died, softened. So they could make her sit down like a living person and changed the clothes moving her limbs freely. The Chunbukyo Church members explained that the grace of God makes the corpse bloom beautifully like this.

In February 1957, just before I entered Kyunggi High School, I was seriously ill with my fever going up and down 40 degrees Celsius. When I came to my senses after being ill for a week, my mother told me that I did not get any better even though all kinds of treatments were given, but when I was made to drink the Water of Life that my aunt had saved, the fever went down and I recovered. From then on, my aunt and mother encouraged me to attend the Chunbukyo Church, but I did not have much desire to go even though I felt the Water of Life was something very special. Pretty much concerned with my attitude, they said, “There is the largest church in Korea called the Twenty-Thousand Altar with a seating capacity of 20,000. So why not visit and take a look.” They asked me to visit and take a look just once and it’s up to me to go there again. Unable to overcome such earnest recommendations, I followed them to the Twenty-Thousand Altar in September 1957.

‘There’s the largest church in Korea called Twenty-Thousand Altar. Let us visit and take a look once.
It’s all right for you not to come again, so let’s go. Unable to refuse their earnest recommendation, I went to the Altar.

After walking for a while from the streetcar terminal in Wonhyo-ro, a white church building standing tall on the hill caught my eyes and the soft sound of music bells ringing from the high tower was spreading far away. On both sides of the steep road leading to the Chunbukyo Church, students in clean school uniforms lined up, helping the elderly who had difficulty in moving and guiding them to the front door. It was great to see them helping others first without any sign of hardship even though they were sweating pretty much.

When I arrived at the front door and told the guide that it was my first visit, he kindly guided me to the third floor, where the students were seated. By that time, the inside of the Altar had already been filled with a lot of people from the first to the third floor. After a while, Elder Park Tae-sun took the stage and led the hymn. I felt unfamiliar and strange when I first saw people clapping their hands while singing. It was difficult for me to understand what Elder Park said to unravel the Bible verse, but I was pretty much impressed with the way he preached. He preached so vigorously that the large Altar resounded loudly. When I attended the Sunday service of Twenty-Thousand Altar several times, I was asked by one of the student council members to join them. He told me “If you come to worship steadily, you’ll understand the sermons and receive the blessing.” So I joined the student council. From then on, I did not miss the Sunday service and participated in the student council activities such as guidance and choir.

As I continued attending worship services, I began to understand the words of God one by one. Elder Park testified, “I am the righteous man of the East mentioned in the Bible, and I am an Olive Tree,” and explained about it. He also mentioned that as recorded in Chapter 41 in the book of Isaiah, the place where the sun rises in the east and where a man from the east appears is Korea. In particular, when he said, “Korea is a blessed land,” I was deeply moved. As a teenager at the time, I was feeling deeply frustrated by the look of our country ruined by the war. When I heard his words, I thought, ‘That’s right! Now that a precious person appeared, my country is a blessed land!’ I felt happy and my strength soared.

When Elder Park’s hands touched me for the first time, even though his hands slightly touched
my eyes, they hurt as if my eyeballs were about to fall out, and my belly hurt as if I were stabbed every corner with an awl. After a while, my eyes and inside of my chest felt refreshed and my head cleared.

After that, I went to Sosa Faith Village in the winter of 1957 and got a chance to have his hands laid on me for the first time. While many people were being touched one after another, I was able to see the people in front. Even though He laid hands on them lightly, some people screamed and struggled. When it was my turn and I went in front of Elder Park, I could smell a very sweet fragrance. But, when Elder Park lightly touched my eyes, saying, “Shh!”, they hurt as if they would fall out. When he laid hands on the belly, I struggled in pain as if I were stabbed every corner with an awl, and I uttered “Please forgive me,” without realizing it. Elder Park said, “Why are you so stubborn?” After pointing out my sins one by one, he said, “They’ve got to be thrown out.” Finally, tapping my head he said, “Done. Do not sin any more.” After the laying on of hands, I came out in embarrassment, and I had to sit down quietly for a while because of the lingering pain. A little bit later, the pain was gone, the chest felt refreshed, and the head cleared. When I talked to the friend who went with me, he explained that the sweet fragrance I had smelled with the laying on of hands was God’s grace and the pain was felt as sins were being destroyed by the Holy Spirit through the laying on of hands.

The mind lights up radiantly with the joy of Heaven.